As you are probably all aware the preview for next version of Office was released earlier this week. https://pwmather.wordpress.com/2012/07/16/projectserver-2013-preview-sharepoint2013-msproject/

In this post I will give a brief intro to the new version of Project Server 2013. I will cover the look and feel and highlight some of the new features. The screen shots from the post are from the Project online version as I haven’t got around to installing the on-premise version yet. For this example I have created a simple example project called PM Test Project 1.

Firstly lets take a look at the default PWA homepage:

The reminders web part has been updated with the cool new metro style “Track your work” web part to summarise your work. Clicking one of the icons takes you to that page to see the details, for example the Tasks page:

The project centre now has the timeline view available:

You will also see a new button on the Projects tab, Add SharePoint sites: 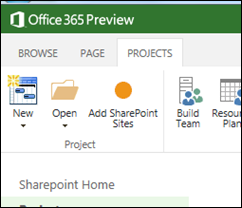 When you click this button a new window will pop up populated with a list of the SharePoint sites based on the SharePoint Project Site template, below you can see the example site I created on the PWA site collection. 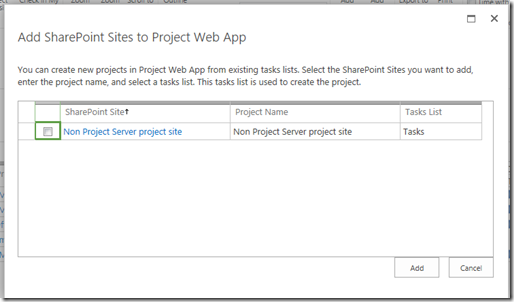 Once these SharePoint project sites are added they are visible in Project server but I will create a separate post for this soon!

The Project sites have nice new Project Summary web part where you can switch between the timeline or upcoming and late tasks:

There is also a notebook on the project site, this uses OneNote:

The built in reports have been updated, take a look at the Project Overview report:

The report is editable, with new charts and tables etc.

The existing charts are all editable:

These are just a few examples of the new features in Project Server 2013 and Project 2013. I will be posting more details in the coming weeks.