Following on from my 2nd post in this mini series on reporting including HTML formatting in Power BI, in this post we will look at a couple more options that will refresh in the Power BI App Service. If you missed the previous posts, the links are below:

The options we will look at in this post require a process to get the Project HTML data into a source that can be queried from Power BI with one call. Firstly I will demonstrate a simple PowerShell script that will get the data and write this to a SharePoint list on the PWA site. This is process is very similar to a Project Online snapshot solution starter script I published back in August 2016: https://pwmather.wordpress.com/2016/08/26/projectonline-data-capture-snapshot-capability-with-powershell-sharepoint-office365-ppm-bi/ Once you have a script running to capture the data on the defined scheduled you will see something similar to the screen shot seen below:

Here you can see my process has run twice, once back in August when I first wrote this script and just now when I ran it again. As this is based on sales demo data, you can see in the two expanded examples the data has not changed but in a real world usage I’d like to think the data would have changed / been updated! Having the data in one list enables a SharePoint OData call from Power BI, as I have included the ProjectId in the data on the list, this can easily be joined with the data from the main Project OData Reporting API. As this data is in a SharePoint list you might need to consider the user permissions / access to the list. If this was running on a schedule, either from a Windows Scheduled task if on-prem or maybe a scheduled Azure Function if you wanted to make use of Azure PaaS, set the schedule to run before the reports were due allowing time for this process to complete. I won’t cover the PowerShell script in detail here as I will create a dedicated post for that in a week or two, but I will highlight the changes required if you were to start with the OData snapshot example.

Once that runs successfully with an account that has full access to all projects and edit access the the SharePoint list, your target list will contain all of the projects along with the selected fields. As mentioned, I will post this full script in a week or two once I get a chance to tidy a few bits up in the code sample but hopefully the screenshots of the changes along with the snapshot example PowerShell script, there will be enough pointers to get started. Now the data is in a single source, it is very simple to use in Power BI.

In Power BI Desktop add a new OData feed, in the URL field enter the SharePoint list REST URL for the source list, for example the REST URL I used is: https://tenant.sharepoint.com/sites/PWA/_api/web/lists/getbytitle(‘ProjectMutliLineFields&#8217;)/Items    where ProjectMutliLineFields is the name of my SharePoint list. Edit the query to launch the Power BI query editor. In this example, my source SharePoint list contains duplicate projects but in my report I want to only see the latest. The steps below will transform the data so that the report only has the latest version for each project record. Rename the query to IDandDate then remove all columns except for the ProjectId and Created columns:

Now group by ProjectId and get the Max Created value, I called this column “Latest”:

That will give you a list of unique Project IDs using the latest record. Now add a 2nd OData feed and use the same SharePoint list REST URL as in the previous step. Remove columns that are not required, I removed all expect for Title, ProjectId, Created and the multiline fields. Then rename the columns to meaningful names if required:

This query will currently contain the duplicate project records based on my example list, next I will merge this query with the IDandDate query using the ProjectId column and the Created/Latest column:

Hold down the Ctrl key to select more than one column per table for the merge.

This will add the new column into the table:

Click the double arrow on the column heading to expand the column then select the aggregate radio button. On the dropdown menu next to Latest select Maximum: 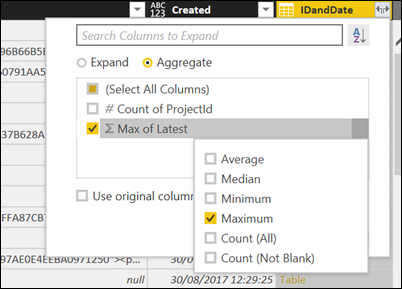 This will show a date value for the latest records, where a null is displayed, there is a duplicate record with a later date:

Filter out the null records from the Max of Latest date column and that is it. For the purpose of this blog post, I also added a 3rd query to the Project OData API to show data from the two sources. Close and Apply the data then ensure the relationships are correct, I also set the IDandDate query to be hidden in the report view: 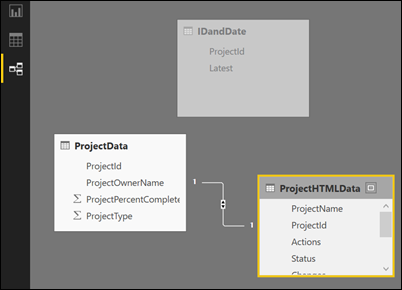 Then design your report as needed making use of the same HTML Viewer custom visual:

As you can see, this is just a simple example like the others just to highlight the HTML formatting being rendered in Power BI.

Another option without having to write and maintain any custom code or write the data to a SharePoint list does make use of a 3rd party tool that extracts the Project Online data into an Azure SQL database as the data changes in Project Online. This particular tool is developed by the Product Dev team I lead at edison365 and is called DataStore. This product is part of our edison365 product suite but is available on its own. This isn’t sales pitch so I won’t go into details here but I just wanted to give another option as some people prefer no code solutions. There are also other software vendors that do similar products for Project Online but I’m not sure if they include the multiline project level fields with the HTML. So using this tool or similar (check they include the HTML fields), you can get all of your Project Online data into an Azure SQL database, as mentioned, the DataStore tool will also include the HTML data as displayed below in the example SQL query below:

Power BI can get data from the Azure SQL Server and this data will also refresh in the Power BI App Service.

Feel free to contact me if you have any queries or questions but hopefully that gives you some ideas on including the HTML formatting in your Project Online reports using Power BI!