I am lucky enough to be at Microsoft’s Ignite conference this week, there are several of my CPS colleagues here with me too: Alan Eardley, Ivan Lloyd and Sacha Cohn. I will try and blog a summary each day if I can.

So on day one we arrived at the conference center ready to start the day. We collected our passes the day before so didn’t have to queue up to do that luckily! When we arrived at 07:30 in the morning I was surprised how many people where there already. After breakfast we headed to the main hall for the keynote, even at 08:10 in the morning there was a swarm of people heading there: 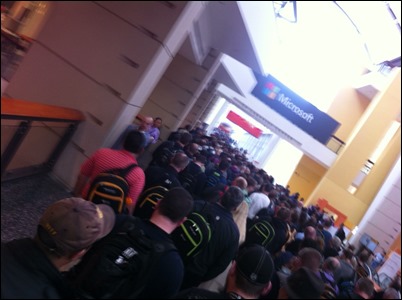 Inside the man hall was very impressive, the pictures below do not do it justice: 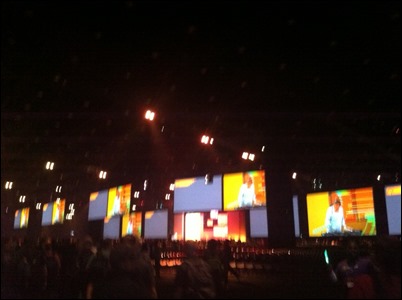 The keynote’s were interesting, some new things demonstrated and discussed. This included all of the changes and new features coming to the cloud. These are summarised already on the following Microsoft cloud blog:

Also a great demo showing the new features Windows 10 has to offer – having only really read about Windows 10 and not having installed it yet, this was very impressive. I am looking for to this operating system.

Other key announcements were Office 2016 Public Preview, Skype for Business improvements, Sway for Business and Education. A good round up can be found here.

I then went on to look around the Expo hall, WOW this was impressive. So many booths and I would have been there all day if I went to all.

The last session I went to was for Excel 2016, this session gave an overview of what was coming in Excel 2016 client. The key takeaways for me here were that Excel 2016 will have components natively in the product rather than add-ons, by this i mean things like Power Map, PowerPivot and Power Query will be included in Excel 2016 by default and no longer require separate add-ons. The advantage to this is that the usage of these tools will be more intuitive and accessible, this also enables automation of Power Query using VBA etc. There is a new function is Excel 2016 that does exponential smoothing for Forecasting – this was pretty cool how simple Excel 2016 will make forecasting for time series data. Another great feature is the Time Grouping option so that you can group time data by month, by quarter, by year etc. at the click of a button without having to write the DAX query. New chart types will also be in Excel 2016, these include Tree Map, Sunburst, Waterfall, Box & Whisker and Histogram & Pareto.

That’s it for now, hope to have a summary for Day 2 later 🙂